What happens during a wedding rehearsal?

How does a wedding rehearsal go?

I attempt to answer these questions by outlining my methodical approach to the very exciting wedding rehearsal!

Rehearsals take place between 10 days and 1 day before the big day (wow, that was like a rap!). They are a wonderful way to run through what is expected to happen from the moment the guests stand and the music starts, to the moment the newly married bride and groom walk back up the aisle as husband and wife.

I don’t think rehearsals exist to be a head ache that entails standing at the perfect latitude and longitude, angle and distance from a tree or other member of the bridal party. Although discussions around positioning are going to happen, they should never end up as an annoying or pedantic part of the rehearsal. Rehearsals exist to give everybody involved a bit of an idea of what’s going to go down, how it’s going down and when.

Is it essential to have a rehearsal before the big day? Nah. Could it be a good idea? Yeah, for sure. Even the most relaxed bridal party could do with a run through of what’s expected to happen at Go Time.

Here’s how it goes down at my rehearsals!

THE CIRCLE OF LOVE 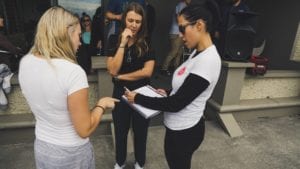 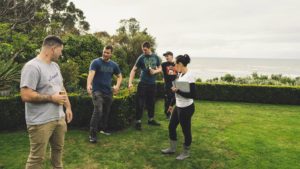 I literally call it the Circle of Love lol.

I confirm all the things (in some cases, for the millionth time):

– What colours the girls are wearing.
– The Bride and Groom’s full, legal names. Ensuring the paperwork matches the ceremony script and ID.
– The Ceremony songs (which I save to a Spotify playlist, named specifically as a back up to the primary device)
– Who will be in charge of the music.
– [from] what time the bride is due to take her last walk as “Miss Maiden-Name”.

Sometimes, if I’m feeling extra on fire, I make funny jokes and we all laugh. Hahaaaaa! It’s also a good chance to catch up with the MC before Go Time. Sometimes the MC is at the rehearsal so we exchange numbers and notes! 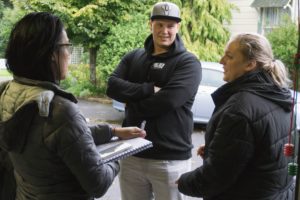 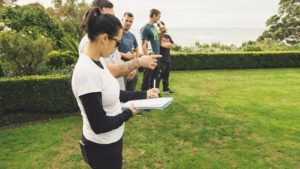 Here, I get the boys standing up the front and have the girls (with their eagle eyes) checking the boys positions, making sure they are stationed OK.

Sometimes, I get the girls to stand in their positions as well. Usually though, the positions are taken more naturally after the walk so in some cases, I do leave it. 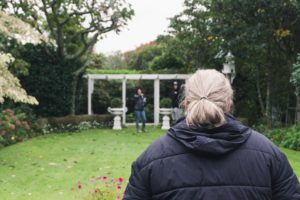 This is where we start the walking in music. The first go, where the girls walk in to the music, we let it all transpire naturally.

The second and third go’s are where we discuss slowing it down and spacing each bridesmaid (or brides-man’s) entry. I gather the girls and we find a marker. This marker indicates the point at which the next bridesmaid starts her journey to the front. Some bridal parties have also used certain points of a song in which to come out – this is especially popular among brides who wish to come out at a certain point of a song too.

So, my little girl, Zarnie usually comes to the rehearsals and she is really cute. I ask her to stand at the top of the aisle (which isn’t an aisle at times, because the chairs haven’t been laid out yet) and she ushers the bridesmaids (or brides-men) down with her cute little arm. It is really cute! Here, you can see her in the background doing it! 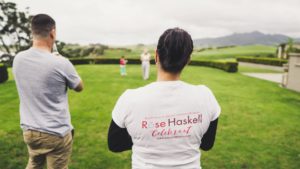 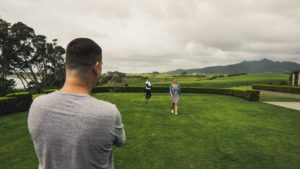 GIVING AWAY OF THE BRIDE 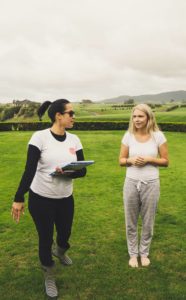 My brides opt for either a verbal giving away “who takes this woman to be married to this man?” or a non-verbal (whoever escorts the bride down the aisle gives her a quick peck on the cheek, shakes hands with the groom, makes a funny joke about their being “no returns” and takes their seat).

It is at this point we discuss where the bride and her company stops, and the order of the giving away ceremony (I’ll call it a ceremony for all intents and purposes).

We then do some delegations:

Once that’s all sorted, we look around to where we are all standing, and make sure everyone has a fair idea of the order and delegated tasks.

Here, I go through the Order of Service for the ceremony (which is: introduction, reading, declaration of intent, vows, rings etc…) 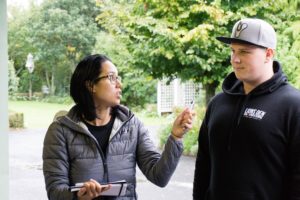 A huge part of this process is confirming who goes first for each active part they take in the ceremony. This is important because I place the bride first for her declaration of intent (then the groom completes his declaration of intent before we proceed to the vows); and then place the bride first for her vows. When it comes to the rings, though, I place the groom first.
I ensure that this ordering is OK with the couple and also confirm where I’ll be standing through each active part (which, once again are the Declaration of Intent, Vows and Rings). For example, I show the Bride and Groom that I’ll stand shoulder to shoulder with them and discreetly hold the microphone to their mouths so their hands are free.

A question in my questionnaire is “would you like to say your vows to each other, or repeat after me”. I confirm what preference they made, and ask if they are still happy with this preference and note accordingly.

I confirm who will have the rings, and go through this process with the ring bearer. Every time, the ring bearer must take the box or bag that the rings came in, otherwise it’s too much for me to hold! I do enjoy that old “oh no where are the rings?” joke. Gets me every time! 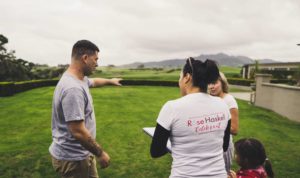 I don’t discuss the placing of the kiss when we are developing the ceremony. I wait until we are at the rehearsal. When we are in the semi-real life situation, it is easier for the Bride and Groom to conceptualise when the best time is for them to kiss. This can be either:

– Straight after the rings ceremony.
– Right at the end, just before the pronouncement.

It is here, I ask them to confirm where they see their kiss-moment.

For my couples who don’t have a rehearsal, I keep the kiss after the rings ceremony. 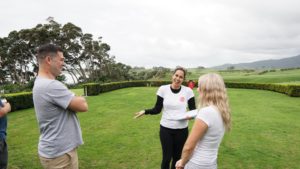 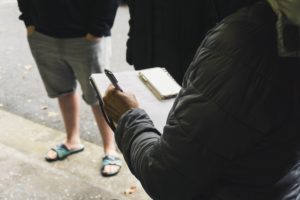 I have a discussion with the Bride and Groom about the walking out because it’s important that they wait until the music starts before walking out; and also make a decision on the point at which they’d like their bridal party to start making their way out too. The decision is usually halfway down the aisle, or when they (the Bride and Groom) have made their way all the way down the aisle. They make this decision based on whether or not they’d like their bridal party close, or far away in the background as the photographer takes photos of them walking out.

Another big component is the logistics around the bride getting her flowers back in between the signing of the register and the end of the ceremony. Sometimes it is easier for the bride to pick her flowers up from the signing table (after a bridesmaid has kindly placed it there for us); sometimes it is easier for the bride to turn around and grab her flowers off her bridesmaid a couple of seconds before the walking out music begins.
That all in mind, as long as we have a discussion about this and have an idea about when the flowers boomerang back to our bride – then we’re all good.

Once that’s all done – that’s basically the end of the rehearsal.

I confirm with the Bride and Groom that I will make the changes discussed at the rehearsal as soon as I get home. I take the paperwork (because all couples are instructed to pass on their wedding documents to the Celebrant before the big day, and that’s the optimum time to get them from my Brides and Grooms) and I ask if anyone, anywhere in the vicinity has any questions.

If there are none, I bid everybody adieu and gap it! 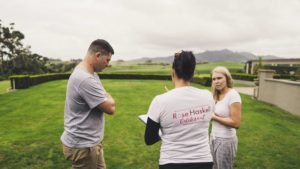 The most important things I stress to my couples are that it is likely they may forget what we just practiced in among the nerves of the day, possibly the stress of the day but definitely the excitement of the day! And that’s OK, the rehearsal is for them, but it is also for me too. I retain the information that we agreed on at the rehearsal and I implement it if the bridal party forget to.

What really matters is the Bride and Groom’s bubble of love, this is their moment and above all else they must focus on each other and let everyone else tackle any complications that may arise, on their behalf. The ceremony is where I, along with all willing helpers manage any complications. A good example of this is Mr and Mrs W’s wedding, 19 January 2018 – but that’s a story for another day. Ask me about it if you’re really curious to know, though! 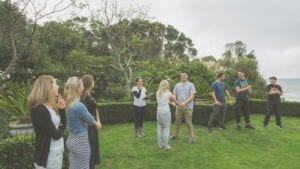 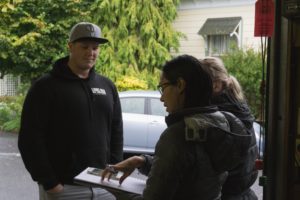 Sometimes my rehearsals don’t even go like this! Sometimes, an entire bridal party will nut out the ceremony logistics; or the planner will have these discussions with the Bride and Groom and I’m simply off to the side taking notes. And that’s OK! As long as we all have a basic idea of what’s happening and when, I don’t mind who takes charge.

A rehearsal is an opportunity to have the discussions we shouldn’t be having when we are front and centre at Go Time. A rough idea is good enough. Pedantic discussions are left at the door. The Bride and Groom MUST have the last say, and whether or not the decision is popular all ’round, everyone around them must respect that decision, and I ensure it is implemented on the day.

Last, but not least, I’d like to acknowledge my behind the scenes shooter, James for coming along with me to these rehearsals to take some photos. It is awesome to have these photos to correspond to each step I take during a rehearsal. Thank you Buddy!

These two particular rehearsals ruled in that they were so opposite! One had no bridal party, the other had a full bridal party, for one so our discussions were totally different! One had an MC, the other didn’t so it was good to have a point of reference on what I do discuss with the MC at the rehearsal!

A huge, huge thank you to Lizabeth and Cameron Utton; and Danielle and Jayden Jaggard for allowing James to take some photos of their rehearsals for use in my blog. I really appreciate it you two – thank you again so so much!